Is Globalisation Good For You?

Is Globalisation Good For You?

Yes! It's a force multiplier e.g. instead of say 10 scientist from a few countries working the human biome we have over 10,000 from all over the world thanks to globalisation. Globalisation is really a byproduct of capitalism. The difference between globalisation and globalism might seem obscure and unimportant, but it matters. Globalisation is a word used by economists to describe international flows of trade, investment and people. Globalism is a word used by demagogues to suggest that globalisation is not a process but an ideology — an evil plan, pushed by a shadowy crowd of people called "globalists".. this is stupid shit from myopic simple-minded people. It ignores the benefits that trade has brought, not just to elites, but to ordinary people all over the world. It suggests that globalisation is a plot rather than a process. And by promoting nationalism as the antidote to the dreaded "globalism" these idiots think things will magically change for them. 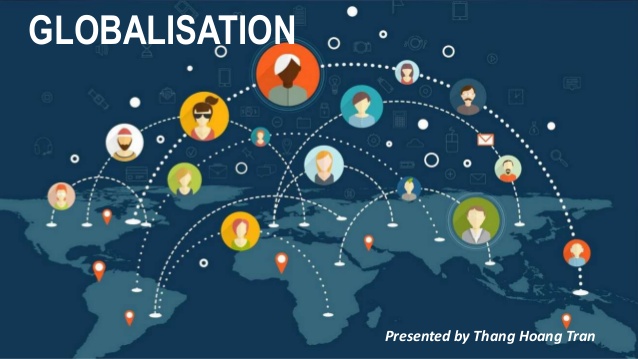 Between 1993 and 2015 — the heyday of globalisation — the proportion of the world's population living in extreme poverty almost halved. International trade has helped to pull billions of people into the global middle class and turned once poverty-stricken countries such as South Korea into wealthy nations. Trump and his acolytes argue that this Asian prosperity has been bought at the expense of the middle class in the west. But middle-class lifestyles in the west now depend, to a significant extent on globalisation due to accumulated inflation. A lot of inflation has to do due with bankers’ scams going unchecked under Republicans rule as they skim off transactions and use I.O.U.s collateral in an ever expanding wealth bubble that is mostly just a bunch of accounts with I.O.U.s built on top of I.O.U.s for a currency paying out I.O.U.s for I.O.U.s.

Competition from cheap labour in Asia and Latin America has indeed contributed to a slight stagnation in real wages in the US. But rather than counteract this through public policy, the current US administration has driven rising inequality through regressive taxation and straight up idiocy. Critics of globalisation have every right to start a debate about migration, trade and investment. But their "solutions" are often half-baked, and risk worsening the economic situations of the people they purport to help. Unless you have a very precise idea of what you are doing, you simply create a horrible mess.

What is happening in the UK is a microcosm of what could happen in the rest of the world if and when a Trump-inspired assault on international trade and global supply-chains gathers force. The tariffs that Trump has imposed on goods from China and elsewhere will increase the cost of living for Americans. Meanwhile, fears of a global trade war already weigh heavily on the stock market.

All this is reminiscent of the backlash against globalisation in the 1930s, a process chronicled by Harold James, a Princeton historian, in The End of Globalisation. Mr James showed how surging protectionism in the 1930s went hand-in-hand with a rise in radical ideologies and a drift to war. He thinks it "highly likely" that today's "de-globalisation" will also culminate in war.