Submitted 1 year 6 months ago by CultureWhiz.

America divides its population into five tribes: Whites, Blacks, Hispanics, Native Americans and Asians/Pacific Islanders. For all intents and purposes, these are arbitrary concepts, but individuals seem to take them very seriously and they form their personal identities based on them.

When the US was founded, it was primarily an English colony. It tried to do away with a lot of class constraints of the old society when it broke away from England, so official documents were written and enshrined to create a nation founded on the idea that "all men were created equal". The "self-evidence" that individuals born or naturalized in the United States were by virtue of that, US citizens was the other concept essential to outlining American social philosophy.

These two ideals should have been sufficient in America to create a veritable melting pot where individuals can blend with each other harmoniously and naturally and thus create a great American nationality. In the same way as in Brazil. Nevertheless, there were also competing ideals and forces (colonial elite) that did not allow the One Nation Under God to really develop, and instead led to the rise of many parallel ethno-cultures in its place.

The birth of the "white" identity

Most Europeans are not aware of the fact that they are “white”, and do not think of themselves as ‘white‘. Germans think of themselves as Germans, and Poles think of themselves as Poles. The British as English, Scottish or Welsh, not "white". The term 'white' originated during the colonial times, when various Western conquerors came upon the shores of continents where people had a darker pigmentation than these colonists did. Still, in many Spanish colonies, the conquistadors thought of themselves more as ‘Spaniards’ than ‘whites‘. It was in the English colonies that the 'white' self-nomination became the strongest.

Since establishing a white "nationality," some of the Founding Fathers went so far as to declare that only the English were "white" and even people like Germans and Swedes were not. This new white "ethnos" took deep root in the American psyche and became a pillar in establishing other identities that gradually split America into many new uniquely American "ethnic groups" that seem to exist in the US and some other British colonies only as severe ethnic identities: the Whites, the Hispanics, the Asians, etc.

After the Native Americans had been forced out and the Founding Fathers had a "white country in America, mainly ethnically "English," they did not hold it that way, very contrary to their own plans. It was more important to become rich, so they went ahead and brought African slaves as they faced a "labor shortage" and it was too costly to import English. The slaves served free of charge. It seems to them that it was more imperative to grow rich with slave labor while bringing thousands upon thousands of captive Africans into the country than to maintain a newly created "white nation." They did not think of what would become of these slaves and their descendants in the future, where they would live, how the character of the "white country" they were attempting to create would be changed. They had two competing impulses, in other words, one for 'racial purity' and one for profit at the expense of another man, whoever he might be.

Black people from Africa did not think of themselves as Black, either, until they came to America. They thought of themselves by the name of tribes that they belonged to. However, these African identities were completely obliterated and instead morphed into a new “Black” identity by the virtue of different tribes being dumped together in the New World. They were now called “Black” by the settlers who were calling themselves “White”.

Thus, there were now two nations in the US, one Black and one White. When the slaves were finally freed, the two legal principles mentioned before eventually and, after along struggle ‘kicked in’ in their favor and helped ‘adjust their status‘- the first one again was that ‘all men were created equal’, and the second one was that almost sacred conviction of every American that anyone born in the United States was a US citizen. Following these events, albeit not immediately, a “Black”, and later ”African-American” identity was born.

The first settlers carried with them a lot of Old World snobbery, uniquely English. The main one was that anyone who was not English and /or who did not act, speak or look English was somehow inferior. Being an American in those times meant to be ‘English’, or, at least, talk and behave like one and have an English name to boot.

OK, it was their country and they made the rules. This I can go along with. But they again do not practice what they preach and they go ahead and start bringing in boatloads of new immigrants from Europe because they are facing a new labor shortage and need someone to man factories and coal mines. They took advantage of turmoil and hunger on the Old Continent and brought more new, non-English people in.

When the Irish and, later, the Germans, the Italians and the East European Jews arrived, they came up against these merciless English snobberies. Instead of being embraced into a “melting pot”, many were kept at a distance by the people who had come before them and were not accepted as true Americans for a long time. If you had a non-English name, a foreign accent or, God forbid, spoke a foreign language, and did not behave as the original British settlers, you faced ostracism. You were kept at an arm’s length and treated as an outsider. In addition to that, even after you had children in the US, again, the original settlers would still call them Italians, Irish, Jewish or Polish and continued to discriminate against them for some generations to come.

The reaction of the new native-born Americans was to assert pride in their origin, and hyphenate themselves. “I am proud to be an Italian- American! “, “I am proud to be an Irish-American! “ Such hyphenated pride was often simply a backlash to the snootiness of the first English settlers. The new people were Americans because they were born in the US, but since they were not British in origin, they would still be considered not quite American for a long time to come. Hence, they would now form a previously unknown “dual” identity the likes of which did not exist in the Old World, where either you were German or you were not, or you were an Irishman or you were not. It was simple there. It became complicated in the US. Hyphenization seemed to solve the problem somewhat.

Many of such groups became encysted in ethnic neighborhoods and special sections of the cities partly because they needed the support of like souls in the new land, and, partly, because those who had come before them discriminated against them

None of these American ethno- identifying terms helped in creating a single American identity, but rather, further paved the way to what we now know as Multi-Culturalism.

Many Latin Americans of various immigrant origins cannot understand the US people’s tendency to hyphenate and to be proud of being, say, an Italian -(American), all while not having Italian citizenship, never having been to Italy and not speaking any Italian. Why can’t a person be just an American? they muse. They are not aware of how in the US, the English exclusiveness reverberating through two centuries keeps many people from becoming members of society with only one word to describe them as one would be in so many countries south of the US border.

With all the snobberies and the “white identity” still in place, the US government surprisingly goes ahead and purchases Louisiana with its very mixed Creole population, then annexes the northern part of Mexico with its mostly mixed “mestizo” inhabitants, and, later, brings in Hawaii, the Philippines and Puerto Rico under its fold with more “non-white” people now joining the country in one way or another. Add to that the Chinese and Japanese laborers that were brought in to build railroads, and the appropriation of the territories of Guam, Samoa and the Marianas, and the United States again adds to its population a veritable potpourri of new cultures and identities.

How are you going to sort it out? The original principles of the Constitution would again be applied: all people born or naturalized in the US are US citizens and those born or naturalized in US possessions are US nationals. However, because of the unnatural “white nationality “ which now encompassed all the English descendants as well as other Europeans who by now have been “Americanized” still in place with all its superciliousness, there is still continued stratification and discrimination across all strata of society. The groups who cannot join “the white nation” form their own divisions based on how they look and how they see each other. Chinese and Japanese become Asian- Americans, Puerto Ricans and Mexicans become Hispanic Americans while Italians and Jews join the “White” or “Caucasian” group.

(By the way, outside of the English language, the word “Caucasian” means people from the Caucasus mountains- Armenians, Georgians, Azeris. However, in the US, it means people with “light skin” having origins in Europe, Middle East and N. Africa now. So the Berbers and Afghans have now joined the English. Kind of inconsistent if you ask me. I often wonder what anthropologists these classifiers have contacted before they coined all these arbitrary terms.)

As a result, all the above groups with the remnants of the Native Americans solidify themselves into a five-race system that is America today.

If you come from another country and move to the United States, you will soon feel the pressure to join one of these ‘tribes’ and abandon your original identity as a Thai, a Peruvian or a German. No, you do not melt into America. You melt into a White America, a Black America, an Asian or a Hispanic America. There is very little that you can do to fight against this ludicrous system as you are now outnumbered by people who will assign you to one of these groups whether you want it or not. This is how these things developed over two centuries and this is now the official policy of the government, schools and workplace. All thanks mainly to the strange New World phenomenon of ‘whiteness’ and the English snobberies which have been rolling down the hill and ricocheting against everybody in this country for two centuries resulting in splitting of the US into such five slices.

If you are new to the US, and you want to just make friends with all the people there, you will inevitably clash with this Quinto-Tribal structure sooner or later. Politicians and other elements exploit this “Five-Nations in One” divisions to get votes, pitch one group of people against another. The reaction to the original rejection by the English of whoever was not like them two hundred years ago keeps boiling in the veins of the American population up until today.

This way the divisions among many ethnicities in America based on the original British insular snobbishness, mistrust, jealousy, selfish profiteering, lack of respect for the fellow man, the puttering Melting Pot that melts unevenly and with great interruptions, and the resulting, long-lasting, uneasy Salad Bowl has been given a fancy name of Multi-Culturalism to camouflage its ugliness. The school systems and the government’s unscientific and artificial ethnic classifications further divide people by giving them unnatural identities that have no equivalent in the countries where these people had originally come from. 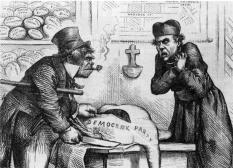 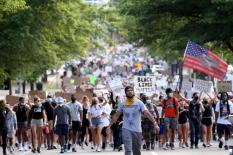