The People of Japan

Submitted 5 years 8 months ago by CultureWhiz.

Researchers have found evidence that the Japanese are descended from various people who mi- grated to the islands from other parts of Asia. Many of these people came in waves from the northeastern part of the Asian mainland, passing through the Korean Peninsula. Some of the ancestors of the Japanese may have come from islands south of Japan. Researchers do not know for certain when people first arrived in Japan. But as early as 4500 B.C., the Japanese islands were inhabited by people who hunted, fished, and gathered fruit and plants for food. This early culture is known as Jomon, which means cord panern, because the people made pottery that was decorated with ropelike designs.

During the 200’s B.C., more major waves of migration occurred because a new, settled agricultural society replaced the Jomon. This culture is called the Yayoi, after the section of modern Tokyo where remains of the culture were found. The Yayoi people grew rice in irrigated fields and established villages along streams and on coastal plains. The Japanese people of today are descended from the Yayoi. In fact, researchers believe that by A.D. 100, the people living throughout the islands closely resembled the present-day Japanese in language and appearance.

The Japanese people belong to the Asian geographical ethnicity. Chinese, Koreans, and a group of people called the Ainu make up the largest minority groups in Japan. Most of the Ainu live on Hokkaido, the northernmost of Japan's main islands. Many Ainu have intermarried with the Japanese and adopted the Japanese culture. The rest of the Ainu are ethnically and culturally different from the Japanese. Some researchers believe that the Ainu were Japan's original inhabitants, who were pushed northward by the ancestors of the present-day Japanese people.

Japan's minority groups are believed to suffer from prejudice. But the people who have recorded claims of suffering the most injustices are a group of Japanese known as the burakumin or eta. They come from villages traditionally associated with such tasks as the execution of criminals, the slaughter of cattle, and the tanning of leather. Though not ethnically different from other Japanese— have long been discriminated against. Many of the burakumin live in segregated urban slums or special villages. 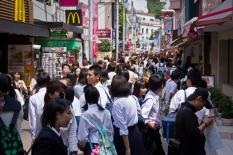