Democratic presidents are better for the economy of the United States

Democratic presidents are better for the economy of the United States

Over the last 70 years, the US economy has done better on average under Democratic presidents than Republican presidents. This is a proven fact. Eisenhower's commitment to fiscal balance and debt reduction resulted in his unwillingness to increase government spending. 40 million Americans are now impoverished. During Eisenhower's eight years in office, the economy expanded at a 2.4 percent annual rate, less than the 4 percent average growth rate during the Truman years.

In January 1961, Eisenhower was replaced by a Democrat, John F. Kennedy, who started what he called the New Frontier. The economy grew by 5.3 percent under the Democrats once again. In the November 1968 election, Eisenhower's vice president, Richard Nixon, defeated an anti-war nominee, George McGovern. President Nixon advocated for the same economic restraint that Eisenhower did. Between November 1968 and May 1970, the Dow-Jones Industrial Average fell 36%. By the end of 1970, unemployment had risen to 6.6%.

What Americans were unable to contribute to the government in higher taxes was instead being paid in the form of a falling dollar. There was negative economic growth from the third quarter of 1974 to the first quarter of 1975. In May 1975, the unemployment rate reached 9%. When Ford left office, the official unemployment rate was 7.7 percent. 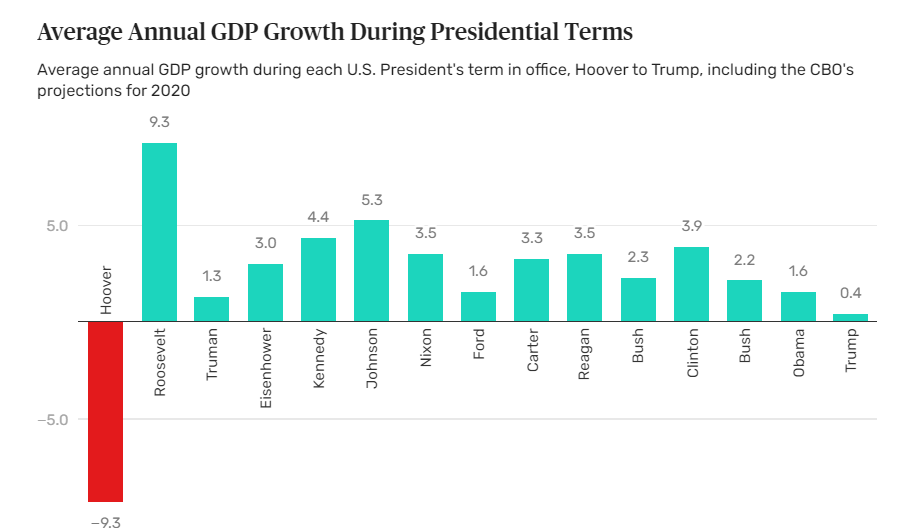