Submitted 6 years 10 months ago by CultureWhiz.

Colombia has around 50 million people. Most of the population lives either in the highlands of the Andes or along the coast of the Caribbean. Very few people live in the interior lowlands. More than three quarters of Colombians live in cities, making it one of the most urban Latin American countries.

Constitution
Colombians are a mix of European, African, and Amerindian people, predominantly Spanish-influenced. With their medium-dark looks and healthy lifestyles, Colombians tend to look sultry. Socioeconomically, Colombians live in a market economy with different classes, often correlating with ethnic group, from the very wealthy to the very poor, along with drug traffickers who have risen rapidly from the bottom to the top and cross socioeconomic boundaries.

Colombians reflect the mix of inheritances, from Europeans and Africans and Amerindians. 37% of the population is European, 3.4% is Amerindian, 49% is mestizo (a mix of white and Amerindian), and 10.6% is African. There is also a very small Roma (gypsy) population. The northwest attracts a large number of Europeans, while the southwest has a higher proportion of Africans, and the less populous inland area holds Amerindians. Nowadays many people from Venezuela and Middle-Eastern countries move to Colombia for improved personal and professional opportunities.

Colombians appear Hispanic although generally with more European features compared to for example Mexicans. In addition to the Spanish influence, immigrants from many northern European countries have shaped the people.

Guys
Colombian guys tend to have balanced looks, with tan skin, rich dark hair, and taller builds than other Latin Americans. Overall a very smooth look. However, Colombian men have a reputation for having affairs.

Girls
Colombian girls are renowned globally for their beauty. Colombian women, like the men, tend to have tan skin and rich dark hair. With a lot of women being in good shape, and focusing on appearance, they present a good face. Plastic surgery is quite common, including for the breasts and butt. Backing up their looks, Colombian women tend to be very caring and open.

Relationships
Colombians form tight social bonds, similarly to other parts of Latin America. After moving away from traditional lifestyles, today Colombian men and women often live in cities, and both work. Colombian relationships are still somewhat more on the traditional side, though, with men pursuing women rather directly. Race and class constrain some dating choices, especially in more conservative areas. In very traditional regions, a couple may require a chaperon.

Because Colombian guys can get a girl pregnant and then leave without paying child support, there are many single mothers and women distrustful of men. Therefore women may wait longer to have sex while dating men.

A Colombian wedding tradition has the bride and groom exchanging coins, to symbolize their unity. Godparents continue to guide the couple. The Catholic church still has enough currency to limit divorce and other liberal activities.

Colombians have less concern about age differences in relationships. Colombians often date people from other countries, sometimes moving to live together. It is more common for urban than rural Colombians to be open to relationships with foreigners.

Family Life
Once married, a Colombian couple may live with their extended family, or more often nowadays, live on their own. Colombians are relatively open to relationships with people from other cultures. Overall, though, Colombian relationships remain somewhat traditional.

Social Groups
Colombians divide themselves by ethnicity and socioeconomic class. Ethnically, Colombia is primarily a mix of Europeans, Amerindians, and Africans, with considerable crossover. Socially and economically, Colombia has a wide range including a growing middle class, some extreme poverty, a concentrated upper class, and an unconventionally wealthy group of narcotraficantes.

Ethnic Groups
The three main ethnic groups are Europeans, Amerindians, and Africans, in order from most people to fewest. The African population has mixed with the others to form mulattoes (black and white) and zambos (black and native). Romani (gypsy) people have received official recognition as a sizable group as well. Additionally, there are 85 ethnic groups overall. Many Colombians identify as an ethnic mix rather than one or another continental lineage.

The different ethnic groups tend to live in different regions of the country, according to historical pressures. Colombians of European descent often live in cities, especially Bogotá and Medellín, as well as the highland cities. In the Andean highland countryside, most people are mestizo, mixed from Spanish conquistadors with native women. A significant number of mestizos also live in Colombia's cities. Purely Amerindian populations remain spread out around the country, and retain legal autonomy over customary affairs. The black and mulatto populations tend to live on both coasts, the Caribbean and Pacific. Offshore islands also have sizable black populations, although they have a very different culture from the mainland, in everything from religion to language.

Socioeconomically, the main body of the country often favors Hispanics, with African and Amerindian people living more marginally. Blacks have fared better than natives in Colombia, with a lengthier involvement with the Spaniards. There has been some confusion, as blacks have historically been officially less recognized, while officially more integrated, with mainstream Hispanic culture. Even today, some of the most difficult parts of Colombia are heavily African regions. Overall, Colombia continues to integrate its populations, with generally peaceful relations.

Socioeconomic Groups
Class status in Colombia today has tight links with race, following the common Latin American pattern where lighter populations tend to have more wealth and power. Twentieth-century industrialization brought more modernity and openness, although the country remains relatively conservative.
Colombians tend to be class-conscious, with fairly firm distinctions from upper- to lower-class. The city is more socially fluid than the country.

Wealthy members of the upper classes make informal groups called "roscas", named after a twisted pastry, and make important social and economic decisions. A small number of families have historically dominated these upper classes.
The middle class is growing with the ranks of the increasingly affluent lower classes. Often in small business, these people work hard to improve their position in the country.

Most cities in Colombia have a complete range of classes represented, from the lowest to the highest. Smaller settlements will only have a subset. The overall country has a huge majority in the low to middle classes, with a small upper class. Around ten percent of the Colombian population lives in overall well-made places.
Drugs, especially cocaine, have had a strong influence on society and have even created a distinct social class. Colombian drug groups have killed numerous military, legal, and political personnel, including five prominent presidential candidates. The illegal drug industry has crossed class boundaries, mixing extremely poor traffickers all the way up to the top of the country.

Customs
Colombian traditions have mostly come from Spain, blending with native customs and African imports. Today Colombia has a unique culture, iconic of much of Latin America. As the country modernizes, the Catholic church continues to have a lot of impact across most areas of Colombian culture.

Language
Spanish is the by far the predominant language in Colombia, spoken by more than 99% of the population. Colombian Spanish, especially in the big cities, is fairly general and understandable. On the coasts, Spanish is spoken more rapidly. Minority languages include dozens of Amerindian tongues, a couple of Creole blends, and the Romani language spoken by some Roma.

Religion
Roman Catholicism is the most common religion in Colombia, like in much of Latin America although less so than in other countries. Around 70% of Colombians are Catholic, while another 20% are different Christian denominations, predominantly Protestant. Around 5% of Colombians do not practice religion, while the remainder adhere to a variety of faiths. Legally, Colombia treats all religious groups equally.

Lifestyle
Colombian life is relaxed yet focused. The relatively urban country has a comfortable pace, while life in the countryside remains very tranquil. Colombians live very differently depending on which region of the country they reside in. The coastal areas have attractive and busy cities. The Andean middle has the major center of the country. The jungles are far less developed, and the small islands are quite quiet.

Everyday Life
Daily life in Colombia is fairly recognizable for most westerners, as it progresses from breakfast through the workday and into evening relaxation. Violence has shaken the country, with street crime and drug trafficking ratcheting up fears. However, even amid the violence, which is now on the wane, Colombians find ways to enjoy the finer things in life, from good coffee to dancing.

Art
Literature has long been important to Colombia, whose most notable author is magical realist Gabriel García Márquez. Colombian visual art looks brilliantly colorful as it reflects the bright surroundings of the country. Perhaps the most notable of Colombia's music is "cumbia", a popular and danceable sound with sexually suggestive moves. Cumbia, the soundtrack of the country, combines Spanish and African music.

Dance
Colombians love to dance. In addition to cumbia, Colombians dance a lot to salsa, as well as countless other styles. "Vallenato" is popular on the Caribbean side, with local instruments mixing with accordion. "Bambuco" has waltz-like rhythms, extremely complex moves, and is more common in the Andes.

Sports
Soccer (fútbol) is the top sport in Colombia. Other sports enjoying some popularity include baseball, boxing, and martial arts. An Amerindian game called "tejo" involves throwing a metal disc at a clay target, containing explosives that create a loud gunshot-like sound upon impact.

Food
Colombians eat a great variety of tropical Hispanic foods. Meals are often accompanied with "arepas" (corn cakes), and can include rice or other grains with legumes, plentiful fish as well as land animals, and tropical fruits. Plantains are a common ingredient. A popular soup is "sancocho", a hearty chicken stew. A Bogotá dish is "ajiaco", which combines chicken and corn with three types of potato in a stew, and is accompanied with cream and avocado, among other ingredients. Many Colombian dishes make heavy use of spices. Desserts are often made from "panela", brown sugar. Alcoholic beverages often derive from sugar cane. 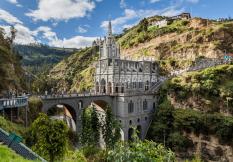