Submitted 1 year 8 months ago by Aleksey.

Armenia is a tiny former Soviet republic nestled in the South Caucasus and bordered by Turkey on one side and Iran and Azerbaijan on the other. In the south, there is a small border with Iran, and in the north, there is a larger border with Georgia. I drove to Yerevan from Tbilisi, Georgia, and it took about six hours, including the border crossing. I suggest flying into Yerevan because most Westerners do not need a visa and you won't have to worry about corrupt border officials who levy arbitrary "fines" for things that don't make sense.

Armenians have a Middle Eastern appearance, resembling Iranians strongly. They are astute, thrifty, and entrepreneurial, and they accomplish a great deal with very little. Armenia is a goldmine of IT talent, and many people compare Armenians to Jews in terms of their achievements relative to their small population. There are Armenians who have escaped slaughter by dispersing throughout the world. Some of them have begun to return with the government's assistance. Armenians fleeing the Syrian conflict are the most recent and largest arrivals, and they have had a significant economic impact and are well-regarded in the region.

If you like slender, olive-skinned brunettes, a large proportion of Armenian women are GORGEOUS. Women in the countryside seem darker-hued at times, but in the capital, the Russians seem to have lightened the populace in the most friendly of ways. Premarital sex is unlikely unless the girl has lived abroad or is a prostitute. Yes, it is that grave. Girls guard their reputations and and cave to the gossip network there. I recommend that you do not go to Armenia looking for women unless you are married-minded. 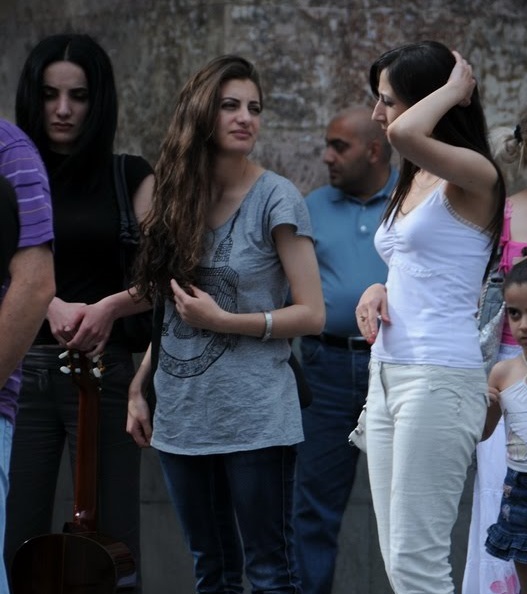 The Quality of Service

Since Armenians are often underemployed, the service is often higher than what would be expected in former Soviet state. They are really friendly in the hospitality industry, and they are eager to make a positive image of Armenia given some of its negative perceptions around the world. The majority of Armenians employed in the city center's service sector speak English. It is less so in the suburbs.

Unless otherwise stated, all of the hotels mentioned below are in the city center.

The Alexander Marriott and the Marriott Yerevan are both luxurious options.

Second-tier comfort hotels include the Doubletree (on the outskirts of the city center), Republica, Radisson Blu (far from the city center yet reasonably priced), and Hotel North Avenue.

Budget hotels include the Hyatt Place, Ibis, and Congress Hotel.

The Armenian mentality is shaped by three factors: the Armenian Genocide, Gregorian Orthodox Christianity, and the aggressive geographical position. Armenians will never let you forget that they are the world's first Christian country. They are proud of this and other facets of Armenian culture, and since they are rarely acknowledged, many will be willing to demonstrate them to you. It's just part of living in Armenia.

Because of the Ottoman Empire's brutal treatment of Armenians, as well as Azerbaijan's ethnic cleansing of them, they frequently have a clannish mindset of us against the world. The word "Otar," which means "outsider," is used to describe foreigners. This isn't supposed to be mocking, but it just means they're not one of us.

Understand that there are two Armenias (or three if you count the diaspora), Yerevan and everywhere else. Because of the development gap, they appear to be two distinct countries. People from Yerevan will warn you not to associate with people from small towns because they are more wary of foreigners, less educated, and less polite than Yerevan Armenians. I also get the impression that Yerevenites are embarrassed by the small towners because they are a bad representation of Armenia. However, I've had fun encounters stopping and milling about in rural areas where people are entertained and delighted to see you.

The Armenian mentality includes preparing to resolve adversity and conflict, but they still enjoy themselves. Many Armenian Americans visit Yerevan in the summer to learn the language and reconnect with their heritage. I usually leave them alone, however several come up to say hello and ask why I'm there.

Police corruption and bribery are an issue in Armenia. When I was there before, I was being pulled over and extorted by cops. Locals are used to it, but as a foreigner with international license plates, I became a target. When I parked my car and took Uber instead, I never had any problems.

I would visit Yerevan even more often if it had a more lively nightlife. The majority of the clubs in Yerevan are shady bars where the working girls want you to buy them overpriced drinks, a few strip clubs, and brothel-style places where the majority of the women are overweight single mothers.

Last time I was there, Paparrazi was the best dance club, but new ones open up as old ones close. The best bars are along the streets in front of the Cascade monument.

Outside of Yerevan, the best bet is:

Tsaghkadzor, a resort area, now has a new Marriott hotel.

A word of caution: Some Armenians will invite you to visit Artsakh, which is still technically part of Azerbaijan. I advise against traveling because you will be cut off from your embassy's help in an emergency, and you would be violating Azerbaijani law simply by visiting, and they will bar you from entering Azerbaijan forever, if not detain you in prison, just to make a political point. Azerbaijanis refer to Artsakh as Nagorno-Karabakh.

I've been following affairs in Nagorno-Karabakh since the brief war there. Armenia's simmering territorial crisis with Azerbaijan erupted into all-out fighting in September, killing over 6,000 people. Since they lost the war, things have become politically volatile, with demonstrations and a brewing insurgency seeking to depose the Prime Minister. Although the ordinary citizens overwhelmingly favor the PM, who was swept into office in 2018 by a mass insurgency, the old guard is seizing the opportunity to reclaim power. It is now in a state of disarray, so it might not be the ideal time to travel.

If you're ever in the Kyiv, Tbilisi, or Baku region, take the short flight to Yerevan and stay for a week or two. In Yerevan, simple pleasures and family are the laws. I happened to be in Yerevan during the 2018 revolution, and I understand that positive changes (less corruption, a more vibrant business sector) are noticeable.