Submitted 3 years 4 months ago by maxpain.

Dutch females really have to be strong and confident or else they will be walked over by the (native) Dutch males. Dutch women expect total acquiescence from men, and the ability to follow orders. Dutch women, through a series of shouting, rudeness, and intimidation, will eventually home in on the man most likely to carry their shopping bags for them at Albert Heijn in the near future. They’ll persist until their chosen victim has turned into a lump of quivering jelly. Unlike the rest of the world, in the Netherlands it wasn’t the cavemen who went out hunting, it was actually the women. The men were busy in the cave, perfecting what would later be known as the Lion King hairstyle and looking after the kids, while the women, after a hard days hunting would return home, and start drawing paintings of themselves and their hunting activities on the walls of the cave.

Being Dutch, outside of the office she dressed for comfort. Some might say that she was too lazy to make an effort with her appearance, but I wouldn’t dream of saying such a thing. Once you get married even the little effort she once made to look just like every other Dutch girl about town will go out of the window. Out of nowhere she’ll start wearing cardigans that no self respecting moth would ever dream of laying eggs in. She’ll whip out a Philips electric razor and do horrifying things to her hair. What little makeup she possesed will start gathering cobwebs. She’ll wear birkenstocks when she goes out shopping and start buying her lingerie at Wibra. Ironically, she’ll still spend a lot of time telling you what you should be wearing, and going shopping with you, and choosing clothes as if you’re just about to go to school for the first time and need to look smart.

Dutch women are never wrong about anything!

If you’re from London, and a Dutch woman tells you the name of what she says is THE coolest club in the city, don’t politely point out to her that the place she’s referring to has been closed down for several years, and is in fact used as an old peoples home. A key thing I’ve learned about Dutch women is that they’re always right. So don’t argue, smile and nod politely and say “ja, je hebt gelijk.”

When dating a Dutch woman, she’ll speak admiringly about how hard you work, and will be charming and polite to you in public. Once you’re married the family dog will be treated with more respect than you. In fact there’ll be times when you’re not sure if she’s addressing you or the dog, so abrupt is her manner of speaking. When forcibly dragged to the drie dwaze dagen sale at De Bijenkorf, at wifepoint, your face will turn red as she shouts “I SAID THE SKINNY JEANS, DO THOSE LOOK LIKE SKINNY JEANS TO YOU?” Sadly, you’ll get used to this and five years from now will think it’s completely normal to be shouted at and bossed around like a pre-politically correct revisionist version of Zwarte Piet.

If you value your life, never, ever, get the idea in your head to ask your Dutch partner to cook for you. Don’t even ask for a sandwich. A lot of Dutch women, just like their British counterparts believe that critical processes in preparing a meal involve a microwave, or a dangerous driving scooter rider to execute the delivery of the dish. If you actually have the temerity to request a home cooked meal (even if you’ve cooked for her before) don’t be surprised if she turns into an angry shouting demon as a result. “Hoe haal je het in je hoofd??????” 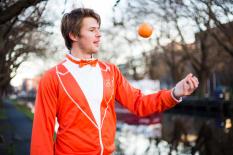 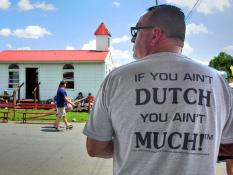