Submitted 4 years 10 months ago by maxpain.

Canada (excluding Montreal) is not my kind of place. It is basically a copy of America except with much colder weather and people. Canadians seem very reserved, very dull, kind of cold and inward focused as opposed to Americans. Overall, Canada doesn't have a core culture. The original Canadian culture is closely associated with the OLD CONSERVATIVE BRITISH ROYAL culture. You are polite, do not make eye contact with strangers and do not get to know someone easily.

The other dominant group is ASIANS: they derive from an equally shy culture, further contributing to the already unfriendly conservative culture. All other groups find themselves in a culture clash, because they see their values, such as friendship, friendliness in the workplace and open society and the freedom to say what is on your mind without being overly cautious, being destroyed. This furthermore contributes to the social dead end phenomena which is common in Canada.

In Canada there is total lack of cafe culture, or places where folks can mingle. It just doesn’t happen. In Europe you can go for a stroll around a bohemian neighborhood and people watch on a lazy afternoon, then have a nice coffee at a coffee shop and meet some beautiful interesting women. In Canada It’s home pod to car pod to work pod to shopping pod to home pod over and over. With that mind I took the opportunity to explore and see how well Canada stands in comparison with the United States. Here are my observations....

The only city worth visiting in this whole province is Vancouver, the rest are small towns full of hippies in pick up trucks. Vancouver itself is overrated; they like to think of themselves as a global city, in reality they're just a rainy provincial gray cesspool stuck in the middle of a beautiful landscape.... anywhere outside Vancouver feels like you're in the middle of Idaho (exciting huh?). Compare Vancouver to Seattle: Seattle’s downtown has soooo much more bustle and energy going on than downtown Vancouver. Vancouver’s downtown core is so sterile and dull: just a bunch of corporate hi-rises with Starbucks on every corner and some sandwich joints for the corporate lunch break: god, what a bore! Never anybody around–or if they are around they’re hurrying to/from the office. Sure there are token busy spots and cafes, but there is this pervasive flatness or dullness to Vancouver.

Vancouver is a bit like having a good looking but vapid girlfriend/boyfriend that has absolutely no personality. It kind of keeps you hanging around for far to long hoping things will get better. Over 90% of the people in Vancouve have nothing to say, no soul, no depth, just worried about ‘fitting in with their clique of sheep minded friends.

I found people here quite superficial and cold as well. Very defensive, paranoid and distant. You are a nobody if you don’t know anyone and most often, if you put an effort to get out there and meet people, you could be left with just a couple numbers of unfriendly cold people who choose to remain distant with you rather than befriend. Life is basically restaurants and exercise.

However, It’s a great place to live if you’re upper middle class and boring. Vancouverites are intolerant of people whose interests fall outside of the narrow band of activities to be done in and around the city: “Don’t like mountain biking? You must be lazy. Like the arts? Look we’ve got totem poles! Oh, you mean the Arts? You are lazy AND pretentious.” And nothing makes me cringe more than hearing people (vancouverites) refer to Vancouver as a “world class city.” It just isn’t. Not by a looong shot. Why not just admit “it’s a one horse town but I like it anyway”? At least someone can relate to that.

After the disappointing stay in BC I left to Alberta and was even more disappointed. Alberta is like Texas but cold, massive houses, massive people, massive SUV's, massive parking lots.... you can not go anywhere without a car.... being in Calgary is like being in a very cold Dallas full of suburbias, highways and shopping malls.... and Edmonton, it's like the Detroit of Canada, meth heads everywhere.... Alberta is a lot less diverse than BC.... mostly white people, north american native Indians and a few Asians.... that's 98% of the demographics there.... as far as the women? think the white women in Wyoming or Montana, that's more or less like they are! Nightlife? None. People go to the TGI fridays at the shopping mall... that's how good the nightlife is!

Summary: A cold, very trashy suburb and even more redneck version of Houston

Toronto is like a big Cleveland Ohio... the city has nothing that would make you go wow, especially if you've been to Europe, south america, Asia and so on. Toronto is like a mega suburbia full of cul de sacs with lake front development... I wasn't impressed. It’s got that small town mediocrity combined with big city smugness. The people are very conservative and unfriendly. To compare, Torontonians are less likely to give you the time of day that New Yorkers even though they hold less desirable jobs and make less money. Ottawa is dead... there is nothing to do there after 6pm! so dont even bother.

Toronto is a city where everyone plays by the rules and everyone is by default scared of everything they don’t know or have not been already exposed to. By definition, people in this city are afraid of “strangers”, something imbedded in the original WASP Torontonian culture that has been exponentially increasing by the arrival of a majority of persecuted immigrants who have been in some way discriminated back home. This further adds to the already pathetic, shy and insecure social culture already existing in Toronto years before the arrival of these immigrants. The key problem with Toronto’s social catastrophy is the “social deadend”, which basically means: friends that you have gathered in the early years of your life up until your early 20’s are pretty much the only friends that you will associate with in the later years of your life with few exceptions.

This is as a result of a shyness and hesitation from lack of friendliness and acceptance of someone that you don’t already know. The city is POLITE, but completely UNFRIENDLY! As a result, the average Torontonian is dependent on the people that he/she usually hangs out with for everything and does not know what to do when left alone.

Toronto is the capital of FACEBOOK as it hosts the largest number of FB users in the World. This is a direct result of the social unfriendliness of the city because its people turned to technology to communicate with the same people that they don’t have immediate access to, and make themselves feel better in a narcissistic way. Any ‘Like’ or a ‘Comment’ on their profile increases their happiness level. And instead of meeting someone new or just enjoying the day, they send 20 text messages a minute to any friend they have, hoping for a response which will make them feel less lonely and satisfy their social appetite while at the same time justifying not interacting with anyone new.

This culture is also fueled by the vast amount of diversity in the city. The illusion of Toronto being a diverse UTOPIA is quickly understood as soon as someone lives here for a few months.

Since there is no dominant ethnic majority other than the original WASP Torontonians and because of this anti-social culture pre-existent of the mass arrivals of a very diverse group of newcomers, all newcomers are forced to associate with people like themselves in order to satisfy their social appetite. Hence, the most popular question you get asked in this city is: “What is your background?”

Toronto, however, is a GREAT place if you are an employer and want to settle your BUSINESS. Because the majority of the city is made up of immigrants who have fled their motherland, they will turn their life upside down and put up with the day to day task of any job with few complaints. This fact, mixed with the no eye-contact, unfriendly but POLITE culture in Toronto makes for a perfect CORPORATE environment.

Seeing this from an employers perspective, the employees come to work and do the job with few complaints, being extremely cautious of what they say (being POLITE), while at the same time, not making friends that would otherwise cause low productivity.

Adding to this, the employees are then dissatisfied because they have not fulfilled their social appetite. In order to make up for this, they spend money on things they don’t need, which is GREAT for companies and businesses selling those products and in turn add to the opportunities that can be explored in Toronto.

The fear of the “stranger” creates a perfect work environment. You are polite but you do not make friends. This limited POLITE interaction becomes a way to advertise (short-sell) yourself. You do this in the best possible way, often times overcompensating for a mediocre career and an average life.

Summary: Pretentious culture that is HIGH even for a big city. Toronto reminds me a lot of San Francisco, as does Vancouver. Huge housing bubble and frosty materialistic inhabitants. Its worth mentioning the very high cost of going ‘out on the town’ in Canada. How can people hang out in public spaces when food and drink are so high priced? $10 for a beer? Just ridiculous.

The only place worth my time and money, it felt more cultural, with a defined identity. Montreal is still very suburban and you'll need a car for a lot of things (is north america after all). Women were thinner, more feminine and more European in their mindset and mannerism..... the cities look a bit ran down though but nevertheless it's worth going there for the women. You'll need to brush up on your french though, they can be a bit anglo phobic. Nightlife is decent.... thought is not bangkok or rio for sure, but it fairs well in comparison to other north american cities its size

I believe it is a relic of the American Revolution, when those who would become Canadians chose to recognize proper authority and obey the laws (of British authority), while their American counterparts, well, rebelled. 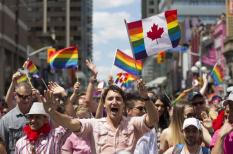